OCEAN CITY – A local amusement park donated the use of its facility last week to ensure seniors at a local high school could have a prom.

Last Friday, Jolly Roger Amusement Parks hosted an “unProm” for seniors at Parkside High School. After what can only be described as an unconventional school year, Director of Sales and Marketing Dawn Dillon said the event was a way to give seniors and their guests an unforgettable night.

“It was definitely something the community needed,” she said.

Dillon said plans for a prom in the park began at a soccer game, when a group of moms from Parkside pitched the idea to Jolly Roger Vice President Stephan Pastusak.

“They were actually sitting in the stands at a soccer game, and my boss was there,” Dillon said. “They were saying because of the pandemic they were sad because the kids weren’t going to be able to experience a prom. He said, ‘Why don’t we just host it at Jolly Roger?’”

Dillon said Jolly Roger donated the space for the unProm, which featured a grand march, food trucks, picture displays and goodie bags, among other things. She noted local businesses also chipped in to donate backdrops, photography services and more.

“We also donated 111 passes to all the seniors, and discounted the passes at $20 per person for night rides and SpeedWorld to the guests that were coming,” she added.

Dillon said more than 200 students were able to come out last Friday for a night of celebration and entertainment, which included mini golf, rides, go-karts and yard games. She also recognized the community and Parkside parents for their efforts in putting together a prom for the seniors and their guests.

“It was definitely a night to remember …,” she said. “The park opened in 1964, and this is the first prom we’ve ever hosted. It’s definitely a sign of good things to come. I think good things will come out of this.”

“We’re definitely not going to turn down anything,” she said. “We’ll take a look at it. If we can make it happen, we definitely will.” 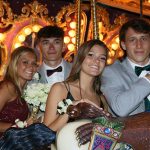