OCEAN CITY — For the 49th year, Ocean City will once again become the epicenter of the sportfishing universe next week when thousands of anglers and tens of thousands of spectators cram into the resort for the return of the prestigious White Marlin Open.

The White Marlin Open deemed the largest billfish tournament in the world, has been one of the highlights of the summer, a sort of crescendo before the gradual downward slide into mid-August and the end of another summer season. Last year, 444 boats and roughly 3,500 anglers participated in the annual event, with a record $9.2 million in prize money doled out to the winners in several categories, including $3.2 million for first place in the signature white marlin category.

After some solid fishing during last weekend’s Huk Big Fish Classic hosted at Talbot Street, the stage is set for what could be a memorable tournament, which gets underway on Monday. Boats can fish three out of the five days, Aug. 8-12. 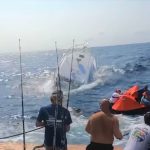 The first day of last year’s White Marlin was highlighted by the Fishbone rescuing the crew of the Knot Stressin after it began taking on water. The Knot Stressin was ultimately deemed unsalvageable and sank in the Poor Man’s Canyon. Submitted Photo

Mayor Rick Meehan referenced the event near the close of Monday’s council meeting.

“The weather got better, the beaches are full and it’s great to see all the people here in Ocean City,” he said. “Also, the fishing has improved. We just had the Big Fish Classic and they were weighing fish all day yesterday.”

Meehan outlined some of the remarkable fish weighed during the Big Fish Classic last weekend and hoped the incredible bite for several species would carry over to the WMO next week. Meehan referenced the WMO because the council will not meet again until after the tournament is over.

“They weighed a white marlin, they weighed a bunch of big-eye tuna, which we really didn’t see here last year, a big blue marlin and lots of swordfish,” he said. “I’m only saying this because we’re not going to be here next week during the White Marlin Open, which is one of our busiest weeks of the year and regarded as the largest billfish tournament in the world, so it’s encouraging the waters are warming up and they’re starting to catch a lot of fish. It should be a great White Marlin Open week in Ocean City, so let’s all take advantage of it and enjoy it.”

Just as they have for decades, hundreds of spectators will line the seawall at the Inlet to watch the parade of boats chugging out early Monday morning, the first of five fishing days in the tournament. The WMO gets underway on Monday and captains and teams of anglers will strategically decide which three of the five days to fish.

Each WMO is uniquely different and this year will likely be no exception. In some years, the winning white marlin is caught on the very first day and the angler and crew wait it out all week to see if their fish will hold up and they will collect their potentially multi-million-dollar prize. In other years, the winning white is weighed on the last hour of the very last day on Friday. In either case, there is never any shortage of drama in the tournament with millions of prize money at stake. This year, for example, the total purse for the WMO is expected to exceed $10 million for the first time.

Thousands will cram into host Harbour Island at 14th Street each day of the tournament for a chance to see a multi-million-dollar fish hauled up the scale. WMO enthusiasts begin showing up early in the afternoon to get a prime viewing spot near the scale and as the day wears on, the crowd swells in the otherwise quiet community as the scales prepare to open each day.

Harbour Island has been and continues to be headquarters for the White Marlin Open, just as it has for decades, but new wrinkles have been added over the years to enhance the spectator experience and create some distancing for the throngs of enthusiasts. In August 2020, with COVID-related restrictions on distancing and gathering sizes full in effect, WMO organizers came up with a modified plan to open a venue for spectators at the downtown recreation complex between 3rd and 4th streets on the bayside.

The impromptu venue included a large LED screen from which spectators could view the weigh-ins at traditional host Harbour Island along with waterfront areas spectators could watch the boats returning to the scales and other amenities.

Last year, WMO officials presented a more formal version of the satellite venue at the downtown park with the same LED viewing screen, but more vendors and other activities including limited food and beverage sales and other activities. This year, what is now known as Marlin Fest will be held at the beach at the Inlet with the big screen for viewing action at the scale, vendors, food and beverage sales including alcohol, live music each day, cornhole tournaments and other family-friendly activities.

The live music will be held from 1 p.m. to 3:30 p.m. each day of the tournament next week and will feature some top local and regional bands. The focus will then switch to the action on the big screen as fish are weighed at host Harbour Island and the leaderboard is erased and rewritten each day. The Mayor and Council on Monday approved the franchise agreement for Marlin Fest at the Inlet starting on Monday.

Each WMO is a little different and this year should bring big fish and big prize money to the winners in several categories if recent fishing trends and the weather holds. Last year, the winning white marlin was caught by angler Butch Wright on the Sushi, an 85.5-pounder worth $3.2 million. The winning blue marlin was a 775-pounder caught by angler David Cash on the Seven worth over $1.1 million. The crew on the Seven also weighed the biggest tuna, a 137-pounder worth over $1.2 million.

Event organizers often say when one WMO is in the books, planning for the next one begins almost immediately. Little has changed since the 2021 event in terms of the format for the most part, although organizers have added a few wrinkles after listening to participating anglers for the 2022 tournament. While last year’s total purse was around $9.2 million, if recent trends hold up, the total purse in 2022 could exceed $10 million for the first time.

There are a few new wrinkles for the 2022 event. For the first time this year, there will be no shark division. Because of new federal regulations on sharks, the category has been eliminated for 2022. Instead, a new swordfish category has been added for this year.

The swordfish category has been added to replace the shark division and is due, in part, to an increased interest in targeting swordfish. There will also be a winner-take-all added entry level for the 2022 WMO. There will also be an extra 30 minutes of fishing time each day during the tournament. Starting this year, lines and teasers can be put in the water starting at 8 a.m., a departure from the traditional 8:30 a.m. daily start time.

Giant waterspout shocks family as it spins ashore in Maryland