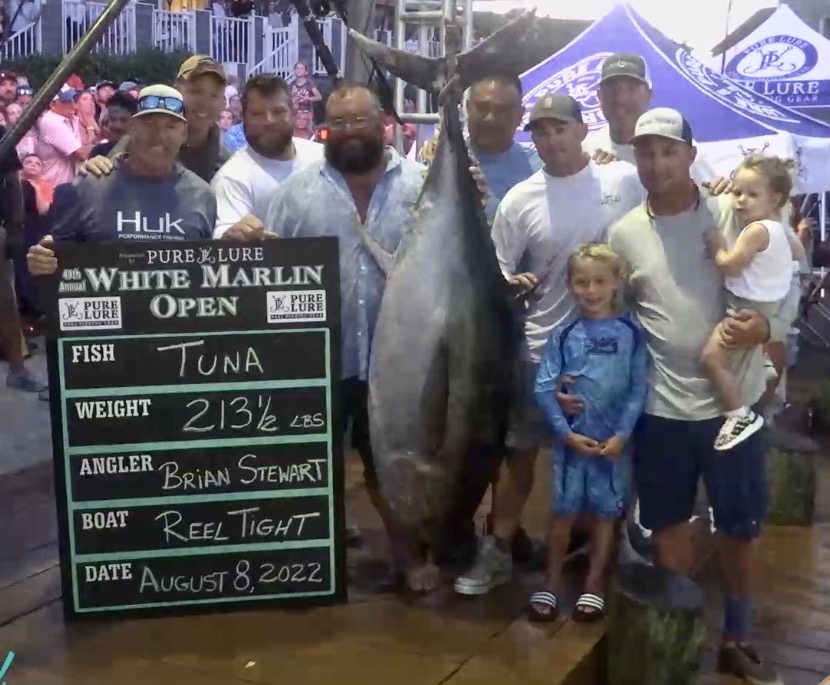 I just got back from a pretty busy first night of scales action at Harbor Island for the start of the 2022 White Marlin Open and it was an exciting time where bigeye tuna dominated the action.  There were 0 white or blue marlin weighed, but there were several yellowfin, multiple bigeye, a few mahi and two wahoo.  There is already a bunch of money going out and totals could grow as the week moves on.  Don’t forget to check out the Hooked on OC live broadcast at the home of the White Marlin Open    www.WhiteMarlinOpen.com

Here’s who’s winning what with current payouts after one day of fishing….. Jake Welcher from College Park, MD was fishing with Captain Debbie Smith and Kory Knieriem on the private boat New Release out of Sunset Marina when he caught this jumbo 85 pound wahoo in the Baltimore Canyon. Hunter and Curt Presnell fished two days in a row in Chincoteague, VA and had their limit of flounder in just about an hour both days.  They also caught a bonus trout.  They were using the Fish in OC Deadly Double. Captain Monty Hawkins of the Morning Star had some good fishing today that included sea bass, mahi and flounder. New Back Deck Fishing Report on our YouTube Channel!