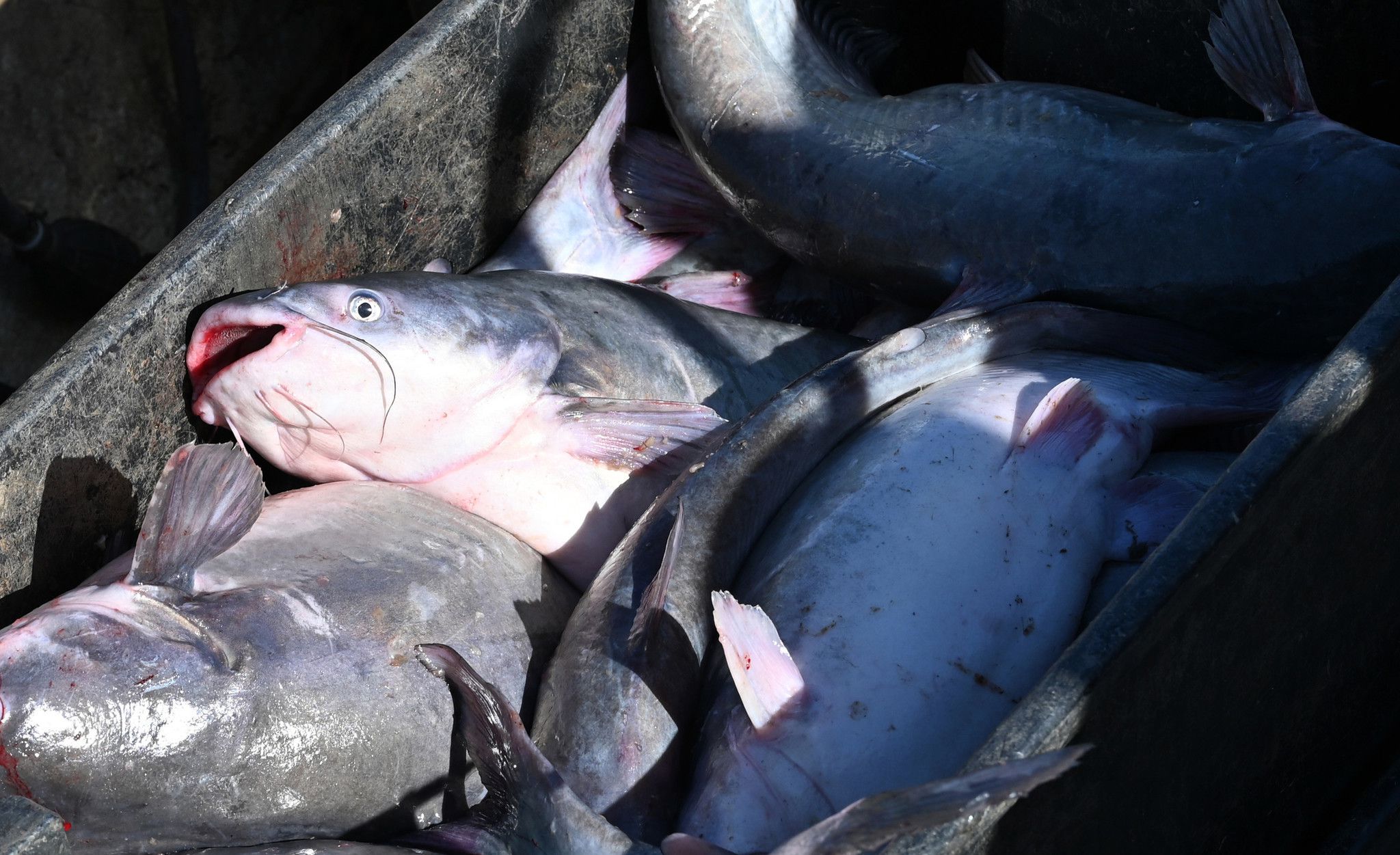 The Chesapeake Bay has an overabundance of invasive blue catfish, but the region’s watermen and seafood wholesalers are missing out on a potentially huge national market for them. There are two reasons — a federal regulation that gives a big advantage to the catfish farming industry in the Mississippi Delta and the lack of a major processor to handle a much larger harvest in Maryland.

We are talking about millions of wild blue catfish — representing potentially hundreds of millions of dollars — in the bay and its tributaries. Scientists believe blue cats, introduced for recreational fishing in Virginia waters in the 1970s, now make up 75% of the marine life in some tidal rivers. This fish can live for 20 to 30 years and grow to 100 pounds or more. (The Maryland state record is 84 pounds.)

Unlike the smaller catfish raised in farm ponds in the Delta and fed grain, the blue catfish roams the waters of Maryland and Virginia, eats the natural food it finds there, including blue crabs, and, once harvested and fileted, offers a meal that many find more appealing than the catfish associated with the warm waters of the south.

There is a market for Chesapeake blue catfish. You can find filets for sale in Giant supermarkets, for instance, and Wegman’s switched exclusively to wild blue catfish two years ago. More restaurants in the region have it on their menus now.

The Maryland Department of Agriculture promotes blue catfish to chefs, wholesale buyers and consumers. The state’s annual harvests in 2018 and 2019 reached more than 2 million pounds, then fell during the pandemic as restaurants closed.

Some Chesapeake watermen go after blue catfish full time; some do it part-time. But the commercial potential is much larger.

What’s holding it back is a mix of politics and business with roots in an amendment to a congressional farm bill from 2008. It required the U.S. Department of Agriculture to inspect the processing of blue catfish. That’s a unique requirement — no other fish is subjected to USDA inspections — and it exists because of politicians from Mississippi and Alabama.

Fearing competition from Asian producers, southern lawmakers pushed the USDA requirement to give an advantage to the industry in the Delta, where raising catfish in farm ponds is big business and processors and USDA inspectors are set up to handle large, frequent harvests. Catfish are the only fish they deal with there.

In Maryland, where processors operate 24/7 to keep all kinds of seafood moving to market, the regulation is an obstacle to a breakout of blue catfish as a major commercial catch.

That’s because a USDA inspector needs to be on the premises when handlers trim and filet catfish. Tim Lydon of ProFish, a major wholesaler based in the District of Columbia, says his company gets just eight hours a day to do that, from 6:30 a.m. to 2:30 p.m. That’s when the inspector is available.

Lydon sells all the blue catfish the ProFish staff can handle in that time — their customers are mainly restaurants, institutions and caterers — but logic tells you that a longer processing time would open up a larger market.

One veteran of the Chesapeake seafood trade agreed with that, estimating that Maryland and Virginia watermen could harvest tens of millions of pounds of catfish a year — if either more inspectors were available or if they were not required.

I should be more specific about the origins of the USDA requirement — it was mostly Republican senators and representatives from catfish-farming states that backed the regulation. I point that out because a New York Times column, published over the weekend, gave the impression that “Democrats out of touch with rural America” had come up with this regulation. In an opinion piece about Dave Harden, a Democratic candidate for Maryland’s 1st District congressional seat held by Republican Andy Harris, a Maryland waterman complained about the USDA regulation, the kind of red tape for which Democrats usually get blamed.

In fact, Republican senators from Alabama and Mississippi were the main backers of the competition-killing law.

There have been calls for its repeal. The Government Accountability Office found it costly and unnecessary, and its effectiveness at holding back imports is questionable. But the law remains.

The Chesapeake Bay Foundation worries about the ecological imbalance caused by the blue catfish’s abundance and its voraciousness. “A robust commercial fishery for blue catfish may help reduce their predatory pressure on other commercial fishery species,” the CBF said earlier this year. The foundation called for oversight of catfish processing by the federal agency responsible for all other fish safety, the Food and Drug Administration.

The other thing needed for a big breakout is a processing center pretty much devoted to catfish, as is the case in the Delta.

Maryland should consider appropriating land for such an operation and recruiting a company already processing catfish on a large scale. There’s enough Chesapeake catfish to keep such a company busy for years. A bigger harvest might also create better balance to life in the bay and give the male blue crab a fighting chance to live longer and help make more baby crabs.

You get what I’m saying here? Eat wild blue catfish, create jobs and save the bay.

So there it is — a whole catfish game plan for the next governor, free of charge.